Ugh, it’s happened again. You’ve returned home to the overwhelming smell of cat pee – and this time, it’s on your clothes. Now, you might be upset, but just hold on!

There are many reasons why your kitty might be peeing outside the litter box and on your things instead. It might not be trying to “get back at you.”

This guide will walk you through five primary reasons why your cat might be peeing on your clothes and how to stop this unwanted behavior, depending on the cause.

Why Your Cat Won’t Stop Peeing on Your Clothes

Some cat owners tend to think that their cats are urinating on their clothing out of “spite” or “revenge.”

While you can’t be 100% sure that your cat’s not trying to get back at you for not feeding it enough wet food, there are more scientific reasons why your cat isn’t abiding by the rules of bathroom breaks in the house.

Many health and behavioral problems can compound on one another, resulting in potty accidents or intentional marking of territory in unacceptable places. Here are a few of the most common.

1. Experiencing Conflict or Fear at the Litter Box Problems at the litter box are among the most common reasons behind a cat’s sudden inappropriate potty behaviors. Suppose your cat no longer feels secure while relieving itself in its designated area. In that case, it’s likely to seek another location it can call its own.

This can happen for a variety of reasons. For instance, if you live in a multi-cat household, some of your cats might be experiencing some tension between one another. These dynamics or any hostility between the cats in the home can lead to bullying, causing one cat to attack the other when it either approaches the litter box or enters a specific area.

Your cat could also associate fear with the litter box, even if it’s the only pet in the home. Imagine that you or a noise accidentally spooked the poor kitty while it was relieving itself one day. After this, it could develop a preference to only relieve itself outside the litter box from then on.

In any case, these uncomfortable dynamics will cause your cat to seek another location to urinate. If your scent or the softness of your clothes’ fabric is pleasing, these causes could be contributing to your cat peeing on clothes.

This issue is connected to the litter box as well. Some cats can be pretty picky when it comes to the type of substrate they’re comfortable with. If it’s harsh on their footpads, they’re unlikely to willingly return to the litter box to pee as expected. Think about it – wouldn’t you prefer to go elsewhere if you had to walk on jagged gravel each time you went to the restroom?

In this case, your cat is merely looking for something that feels better to stand on when it needs to potty. Fortunately, this is a very easy fix. Dr. Laura Monahan of Atlantic Veterinary Hospital recently wrote that cats will even seek out plastic bags, in addition to laundry, if they’re unhappy with pelleted or clay litter. 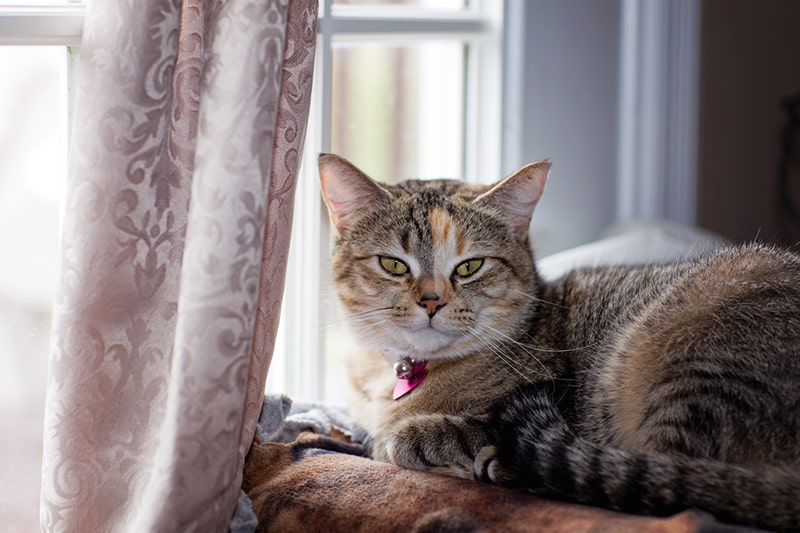 Urine marking is one way that a cat communicates to others in its proximity that it owns a specific area. This behavior might come up for various reasons, mainly related to your cat feeling threatened or as if its space has been invaded.

For example, have you introduced a new cat to the house lately? A recently adopted kitten might make your established pet feel as if they’re losing a bit of their agency. So, it might try to compensate by labeling everything as “mine.”

On the other hand, you may not have adopted a new cat, or any kind of pet, at all. Instead, there might be a new stray in the neighborhood that’s been peeing in your garden. This might be interpreted as a challenging territorial display, causing your cat to feel like it must mark up the place in protest.

Another reason why male cats, in particular, might want to mark territory is because of hormonal changes related to mating. If male cats sense females in heat around the neighborhood, he might be triggered to spray.

4. A Display of Possessiveness Unfortunately, possessive behavior is far more extensively documented in dogs than it is in cats. In canines, the term “possessiveness” – or more, officially, “resource guarding” – is typically assigned to pets that act aggressively or dominantly toward other animals or people when that other pet or person tries to interact with their owner.

This is because the dog feels like it “owns” the person or feels obligated to protect it from everything else. It’s an unhealthy behavioral and mental health problem in many pets, including cats, often related to fears of abandonment.

If your cat feels possessive of you, it’ll likely be tempted to, in a sense, mark you as it would mark territory. The best it can do to fulfill that instinct is pee on your laundry (at least it’s not on you, right?).

5. Incontinence or Other Health Issues 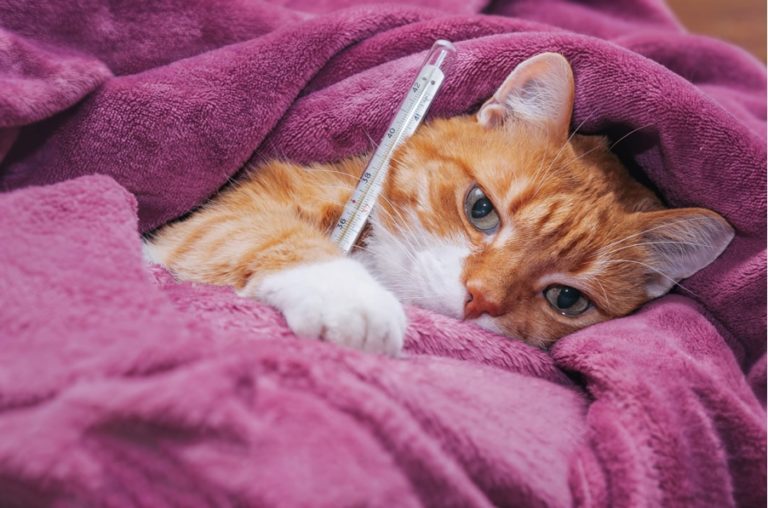 One of the most common yet unfortunate reasons for a cat peeing on its owner’s clothes is because of health issues that are out of its control. One of the most likely issues for senior cats is incontinence, meaning involuntary urination.

So many things can cause a cat to become incontinent, from urethra and bladder problems to nervous system issues. Suppose your cat just happens to be lying on your clothes when it accidentally soils itself. This might be the reason why you keep finding cat pee on your clothes, especially if it’s a cat that enjoys rubbing its scent on your things.

Your cat might also have a urinary tract infection. This condition is known to cause some cats pain, which it may incidentally associate with its litter box. In this case, your cat might try to “escape” the pain by finding another spot outside the litter box to pee, which just happens to be your clothes.

How to Stop Your Cat from Peeing on Your Laundry

Alright, so by now, you understand that there are many equally likely explanations as to why your cat has suddenly decided that your closet is its toilet. Luckily, this behavior can be corrected with a little time and attention paid to your precious cat. Here are a few suggestions on what you can do to stop this behavior, depending on the cause.

If you suspect uncomfortable substrate to be the reason your cat is targeting your clothes instead of its litter box, you can determine which litter alternative would help resolve the problem. Luckily, it’s pretty easy to figure out your cat’s kitty litter preference – just make it a “litter box smorgasbord.”

Buy a few shallow bins and test out various kitty litter types by pouring a minimal layer inside and allowing your cat to use the alternatives for one or more days. There are two main signs you’ll need to keep an eye out for to identify which one your pet prefers:

Additionally, since there is a possibility that your cats are experiencing social tension around the litter box, you should also purchase one litter box per cat, and then add on one extra. This will help give each of them a good balance of privacy and variety, so they don’t have to clash over territory when it’s time to relieve themselves. Is there a particular spot in your closet or drawers that your cat is urinating? If your cat seems to be targeting a location where your clothes are stored, rather than a specific type of object, it might instead having a spatial preference, not a vendetta against you.

This is another issue with a pretty straightforward solution. All you have to do is move its litter box where it seems to prefer going potty – within reason, of course. For instance, if it’s peeing on the top shelf of your closet, it’s probably not a good idea to put a litter box up there. However, you can try to provide a restroom space in the same room or nearby to see if the bad habit stops.

Help Your Cat Develop Positive Associations with the Litter Box

Recall that a cat can become too frightened to feel comfortable going to the bathroom where it should. When this happens, it’s likely to search for alternatives where it shouldn’t, desperate to avoid unnecessary stress.

You can help your cat renew the neutral or positive associations it had with the litter box to begin with. This isn’t necessarily something you should attempt on your own, though.

Instead, it’s best to get in touch with a Certified Applied Animal Behaviorist (CAAB) or board-certified veterinary behaviorist. They’ll be able to help you design a retraining or counterconditioning program, specially tailored to your cat.

Part of the reason this could be your best option in cases of behavioral potty issues is that the retraining program will also address potential possessiveness. In other words, it offers multiple behavioral management solutions on many levels, which is invaluable in the long run.

One way veterinary experts suggest working toward these improved associations is by playing with your cat near the litter box. This will help desensitize it from being afraid of the litter box’s general location and associate it with the fun and happiness that comes with playtime, you, and its toys.

Mitigate Aggression in the House

It’s easy to feel like your cat’s aggression toward one another is a failure on your part, but rest assured that it’s not. Aggressive behavior in households with multiple cats, especially pets of different age groups, is a common issue. It does not necessarily reflect the dynamics you set in the house, but the natural growing pains of living with feline roommates.

In any case, it might not always be apparent that your cats have fights. Below are a few signs to look out for to help you identify when your cats are clashing with one another:

If you notice any of these issues, your cats need to be reacquainted or separated entirely. Allowing them to sit in the same room inside carriers and in each other’s line of sight will help them get used to each other’s presence and scents once again. 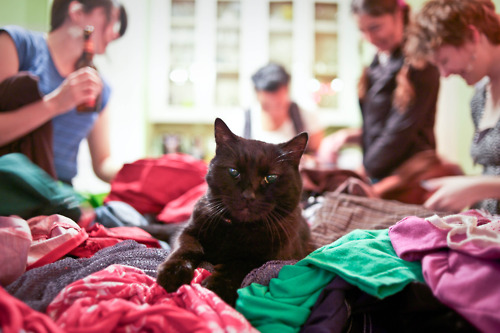 It’s tough when your cat makes your stuff smell like cat pee all week. On the one hand, you want to get frustrated and spritz your cat with a spray bottle. On the other hand, you might feel sympathetic because the cause is out of your and your cat’s control.

In either case, it’s best to assess all the signs – behavioral and medical – using Catzio’s helpful guides to determine which course of action is appropriate for your precious cat.