There are about 45 official cat breeds recognized internationally. Some of them are relatively new, while others, like the Siamese cat, is an ancient animal. This breed is unusual in many ways, from its sharp, angular features to its incessant “talking.”

Siamese cats are remarkably social and have been known to be very demanding of their owner’s love and attention. Spending quality time with this cat is essential, whether that means merely cuddling with it or training it to walk on leash or do tricks. Overall, living with a Siamese cat can be truly rewarding. Here are some things you need to know before bringing this cat home.

What are Siamese Cats Known for?

Siamese cats are known widely for their dynamic personalities and beautifully color-contrasted faces. These slender kitties have a gorgeous cream coat, with seemingly strategically placed dark spots on their faces, ears, paws, and tail. The darkness makes these features stand out from the rest of the body, as if they’re wearing socks or gloves and earmuffs.

They also have striking blue eyes that pierce right into your soul when you look at this pretty kitty. The Siamese cat’s appearance is a distinctively “exotic” style, hailing from their heritage from ancient Asia. This cat is long and thin, with a triangular head, where disproportionately large ears and eyes are perched.

Earlier in their history, another popular trait that this breed was known for was having crossed eyes. It was so common that this was though to be a standard trait associated with the Siamese cat breed. However, over the years, as the cat has grown increasingly popular, careful attention in the breeding process has led to the disappearance of this feature.

Kinked (bent) tails were highly prevalent in this breed as well, but many years of attentive reproduction did away with this physical disorder, too. Despite these physical changes, Siamese cats are still one of the most recognizable breeds worldwide. 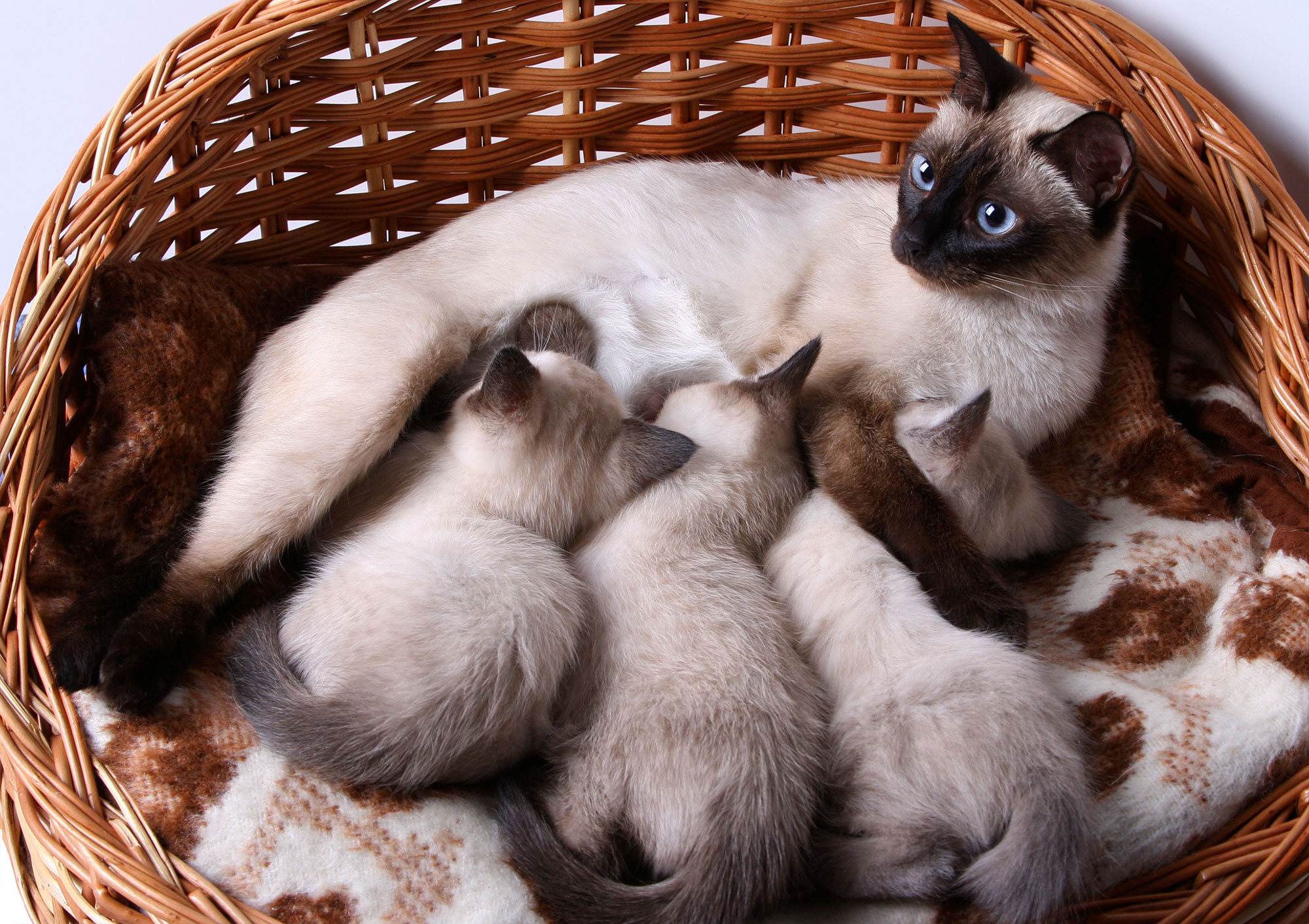 Apart from the already existent global admiration these cats had amassed over the centuries, they were widely popularized in film, especially throughout the 1900s and early 2000s. These media appearances no doubt solidified their place in pop culture and led to many Siamese cats being adopted in these years, too. You might have seen them in:

Long before this cat made so many appearances on the silver screen, it had already solidified its place in the cat community, especially among professionals. It is one of the first breeds ever to receive official classification and recognition from the Cat Fanciers Association (CFA) in 1906.

Since then, breed standards have improved and standardized, the breed quickly became one of the nation’s most popular breeds. In 2018, they were counted as the 13th most popular breed out of the 45 kinds that are officially recognized by the CFA. Their history extends far beyond the CFA and nostalgic movies, though. At one point, they were sacred to the Buddhist communities of Siam. 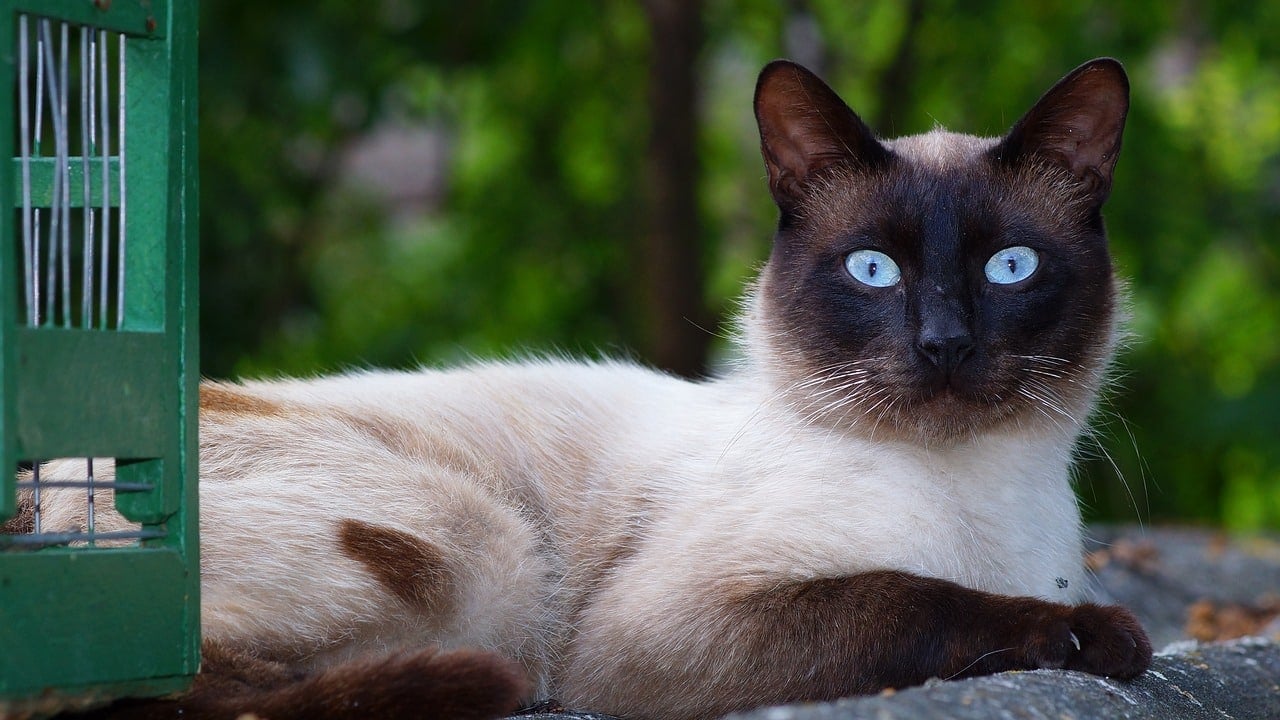 Researchers have yet to lock down the Siamese cat’s exact history. Yet, current knowledge holds that the breed emerged in what is now Thailand (then, it was named “Siam”). This is one of the world’s oldest cat breeds, having once been of even greater importance than they are now.

As mentioned above, legends tell that the Siamese cat was considered sacred. The work of guarding Buddhist temples was entrusted to this animal, for reasons that have not yet been agreed upon. Perhaps the respect this cat earned was related to the idea that the people of Siam believed at the time: Once a family member dies, their soul enters a Siamese cat’s body.

This is one of the beliefs discussed in the ancient manuscript, Tamra Maew (Thai for “The Cat Book Poems”), a literary work that was crafted between the 14-18th centuries. Historians tend to date the Siamese cat’s origin between these historical periods, as the Tamra Maew is the most well-known record that points to their existence.

Still, the cat’s connection to reincarnation may not be the influence for their role in protecting religious monuments at all. This power may have instead been the inspiration for why so many royal families held the cat in such high regard. Regardless of their royal admirers’ reasoning back then, they retained this level of acclaim throughout the centuries, even when they were exported to other countries.

In the 1800s, Siam royalty gifted distinguished European figurers Siamese cats during diplomatic visits. This was one of the most precious offerings one could receive from a Siam person in a place of power. These exchanges took place earlier in the same century that the first-ever Siamese cat appeared in the United States.

First Lady Lucy Webb Hayes (President Rutherford B. Hayes’ wife) owned this trailblazing cat, and the breed has held its place in Americans’ hearts ever since. In later years, the Siamese cat was used to create many more beloved cat breeds, including:

Now, it is important to note that not everything with this cat breed was sweet and rosy. When it was first introduced to Londoners, it was rebuked as “an unnatural, nightmare kind of cat.” This was probably due to some less-than-cute behaviors (discussed below) that have since become less commonplace within the breed.

Now that they’re more pleasant and rid of those physical deformities, though, who can resist those wichien-maat (“moon diamond,” their native Thai name) eyes?

What is the Personality of a Siamese Cat? Siamese cats have lovable personalities. They are widely known as one of the most talkative cat breeds in the world. The CFA describes their ability to vocalize and communicate as “legendary,” as they know how to get their message across with both their body and their voice. Overall, what makes them one of the cat community’s most beloved breeds is that they are the truest “people cat” you’ll ever know.

This makes them the ideal breed for cat owners who want the sociality and outgoing nature that’s leans more closely to a dog’s behavior, yet the energy and personality of the typical housecat. Plus, if you have children, these cats are perfect for your family. Siamese cats are so loyal, affectionate, and wise.

With all these personality traits bundled up in a single breed, though, you’re bound to get a cat that demands your attention whenever you’re near. Their craving for social interaction is the primary reason why so many Siamese cat owners adopt two or more at a time.

They hate to be lonely, so if you think you’ll be away from home for extended periods, it’s best to get your cat a buddy to play with in the meantime. (It’s a good idea to get them toys to busy themselves with, too. This is one of the easiest breeds to keep entertained – a flipping fish or squeaky plush toy will keep their attention for hours!)

What about this “talkative” disposition, though? Don’t underestimate them! Many people have said that you’ll wish you could mute your Siamese cat after living with them for a while. Some Siamese cat owners have described their cat’s vocalizations as similar to a baby’s crying.

Even if you don’t find your cat annoying, beware: It will try to snuggle into bed with you at night, and you don’t want to be woken up by its deep, raspy voice while you’re trying to snooze.

If you’re not as dedicated to your cat as it is to you, it’ll know right away. This breed is known to get jealous, so you may want to come up with activities for you to engage in together. For example, since they’re so intelligent, you can train your Siamese cat to do the following: One of the biggest concerns that new Siamese cat owners have is whether their new cats are going to be aggressive. This seems to be a misunderstanding of how demanding these cats can get when they don’t get the attention they need. Normally, Siamese cats are regarded as incredibly friendly. They are very pleasant with children, other cats, strangers, and even dogs.

Of course, this is not to say that Siamese cats can’t be aggressive at all. There are certainly bad apples that give the breed a bad name now and then, especially if those behavioral problems are not controlled right away. One of the main reasons why a Siamese cat, specifically, might become aggressive is due to pent-up frustration from being left alone for too long.

It can’t be stated enough that Siamese cats need social time. Whether that’s with you or another kitty in the house, spending time with a loved one is essential to their wellbeing. If you don’t think you can give a Siamese cat daily quality time or you can’t afford (or don’t want) two or more cats, perhaps this is not the breed for you.

If you do happen to live your cat alone too often or for too long, they might get into mischief like:

If you’re not careful, your Siamese cat may turn its aggression toward you by either clawing, biting, and other damaging behaviors. This is why you should never encourage your cat to use your hands or feet as targets for pouncing. (Siamese cats are natural fetchers and love to chase. It’s best to turn their attention toward a toy, so they don’t learn to target humans during rough play.)

If you don’t usually lead a busy lifestyle but do expect to leave your Siamese cat alone for an unusual amount of time, turn on a Cat TV channel. Since they’re so intelligent, these cats can be entertained by TV for an impressive amount of time.

The Siamese cat is one of the world’s oldest and most renowned cat breed. Beginning in the 14th century, it has always been recognized as sacred and royal, and has captivated people of all nations for centuries.

If you’re thinking of adopting a Siamese cat, be ready to give it all your love and attention every day. Brush up on your “cat language” because these kitties are very talkative, and stock up on toys to keep it entertained while you’re away.