Can Cats Find Their Way Home When Lost?

Lost pets’ homing abilities have long been a topic of intrigue for casual animal lovers and scientists. Their strong sense of smell, sight, and hearing—all much more powerful than humans’—are integral to their navigational skills. But there might be more to it.

How does a lost cat find its way home? The method, accuracy, and speed with which missing cats return home varies. Few studies have demonstrated cats’ homing abilities. Yet scientists know that a lost cat can navigate home from miles away. But its success depends on its age, sex, the circumstances of getting lost, and more.

Naturally, cat owners worry when their pets go missing, especially if they’re indoor cats with little experience interacting with other animals and navigating the outdoors. Although it’s still best to coordinate search efforts, your cat will likely find its own way back within a few days. Here’s what science has to say.

Can Cats Find Their Way Home from Long Distances?

If your cat happens to run away from home, there’s a good chance it will be able to find its own way back fairly quickly and easily. In fact, some cats can even locate homes they haven’t lived in for several years.

Scientists aren’t entirely sure how our feline companions achieve this. Yet, they do know that cats have a “homing instinct” that helps them get back home after time away. Cat’s ability to navigate is driven by more than just the five major senses. Instead, researchers say that cats’ navigational ability lies beyond taste, smell, sight, touching, and sound.

Now, this isn’t to say that those senses aren’t important. For example, cat owners know all too well that their pets have a habit of marking up their home territory with behaviors like urine spraying. Although cats don’t have as many scent receptors as dogs, they are better at differentiating odors. And since dogs can reportedly detect familiar scents approximately 12 miles away, lost cats may be able to sniff their way home from a comparable distance.

Still, some cats wander even further away than this. So, scientists wonder exactly how they make their way back. Unfortunately, only two bona fide studies exist on the matter. 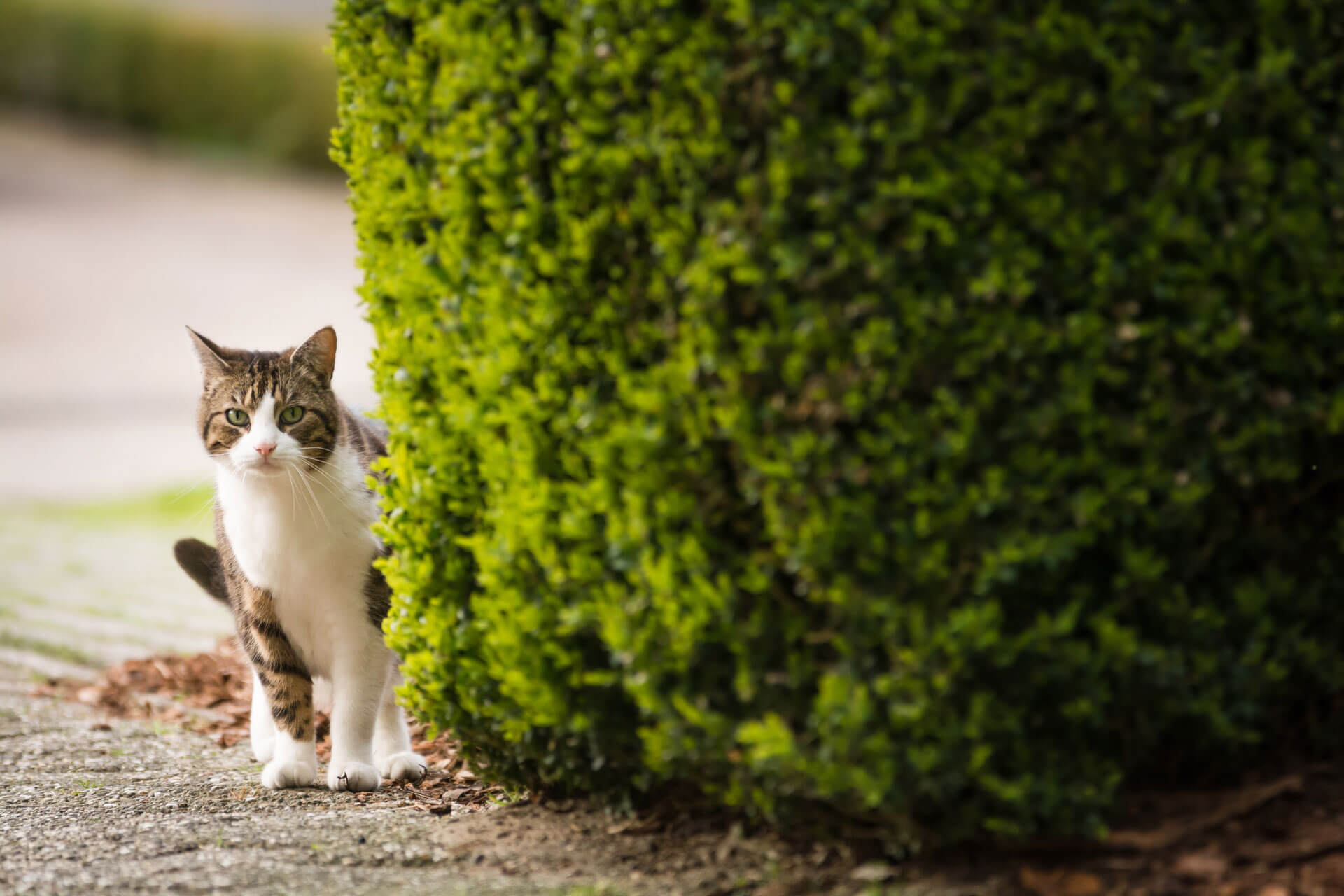 One of the only studies focused on cats’ homing ability that’s ever been published is Professor Frances Herrick’s “Homing Powers of the Cat” from 1922. Herrick wasn’t necessarily studying a lost cat, per se, but observed how a cat’s navigational abilities work by watching a mother cat find her way back to her litter. Despite this, Herris stated of cats in general:

“Probably all cats possess this homing power in varying degrees, and all with fixed abodes might possibly be induced to exercise it under certain conditions; yet in every case the possession of a power, and the tendency to use it should be clearly distinguished; though possession, in this case, be under the firm grasp of heredity, the use is determined by experience and the physiological state of the animal at the moment.”

In other words, all lost cats are capable of finding their way back home, which makes sense considering they’re territorial animals. This “power” is worked into the very fibers of their being due to generations of evolutionary adaptations. But the extent to which the cat uses that navigational prowess, and the efficiency with which it applies this skill, varies with the circumstances and individual.

It was with this idea that Herrick justified studying these homing powers by watching a mother cat. He stated that a cat with maternal responsibilities would be doubly motivated to exercise its navigational abilities. One of its incentives is its distance from a preferred location (i.e., home) and the other is its needy and vulnerable kittens.

Note: Before you proceed into the following summary of Herrick’s research, understand that this study was conducted in the 1920s. Unfortunately, scientists weren’t held to the same animal cruelty prevention standards as those enforced today. Herrick’s methods are questionable, if not outright cruel. Yet, his work yielded results that fill a void in scientific knowledge on this matter.

To get a sense of how powerful cats’ navigational senses are, Herrick transported a cat in a sack one to three miles away from home. The cat was taken further away from its residence with each trial. Every time, its visual, auditory, and olfactory senses were “eliminated” by blindfold or other means.

With each trial, Herrick aimed to discover whether the cat would…

With every trial, the cat exceeded the scientist’s expectations by finding her way back home more quickly than originally estimated. The “homing” times ranged from 8-60 hours, varying with distance, time of day released, and the type of environment the cat was taken to for the experiment.

*This was done intentionally with the hopes that the cat would find a new home, as the owner no longer wanted it due to its habit of eating the farm’s chickens.

In one instance (Trial 8), the cat was anesthetized before transport, and was somehow still able to find its way back home. Herrick made sure to give the cat food and water before leaving it in some cases, but it’s unclear if this was done each time. With every release, the cat oriented itself perfectly toward home, and started off immediately in the correct direction. The only times she veered off were when she spotted dogs or people nearby.

From this study alone, it’s easy to see that cats’ homing abilities are astounding. This cat was taken to multiple locations in unfamiliar territory, and made it home each time with remarkable ease. Confidently, Herrick concluded that none of these returns were due to chance and that cats’ navigational abilities are independent of their sight, hearing, or sense of smell. 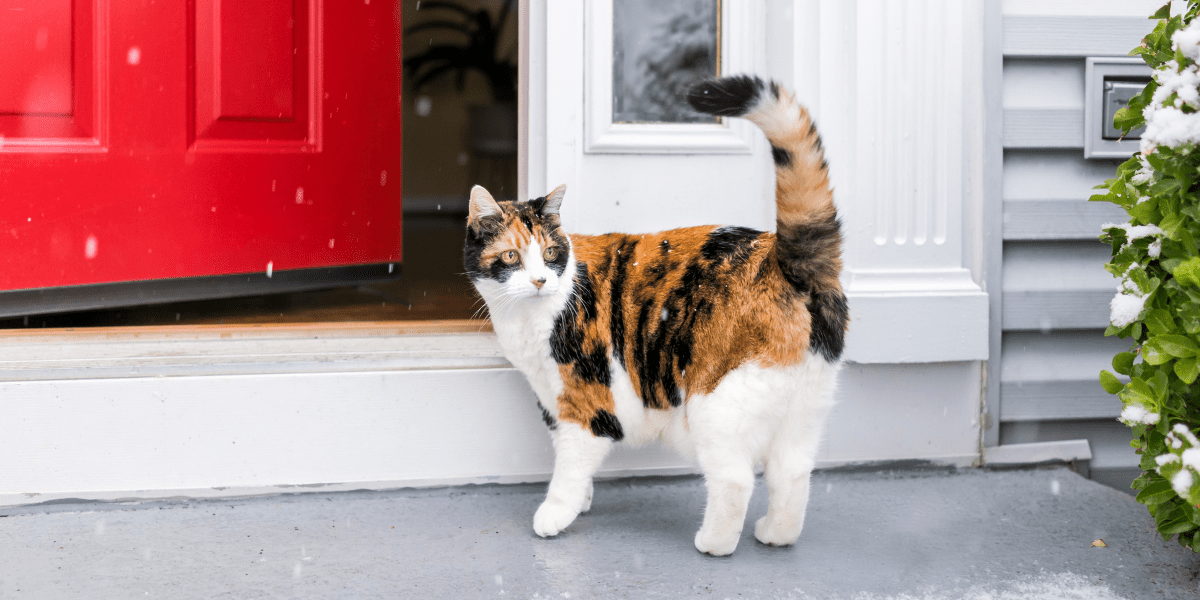 What Pet Owners Should Know About Animals’ Directional Senses

The second of the only two widely known studies on cats’ homing abilities took place in Germany. Instead of repeatedly displacing the felines, the scientists placed them in a large maze instead and observed how well they were able to solve the navigational challenge.

Now, the cats were still moved around in sacks, again, to reduce the extent to which they could depend on their sense of smell, sight, or hearing to guide them back to the correct location. However, this time, they were released at the center of a maze and noted how well the animals were able to find their way to the exits. This maze featured exits that faced the directions of the cats’ homes; however, the cats were not allowed to leave the maze’s boundaries for safety reasons.

Miraculously, none of the cats wandered around the maze at all. Instead, they knew how to get out almost immediately. They rapidly chose their route to the preferred exits; yet, conclusions showed that their sense of direction was only “fair.” Plus, the efficiency with which they were able to navigate to the maze’s exit was directly related to their distance from home.

Specifically, when taken about 3.1 miles away from home, cats showed a 60% success rate for choosing the exit that was closest to the direction of their residence. When taken further, they seemed to lose their sense of navigational accuracy and appeared to not know which direction to go. 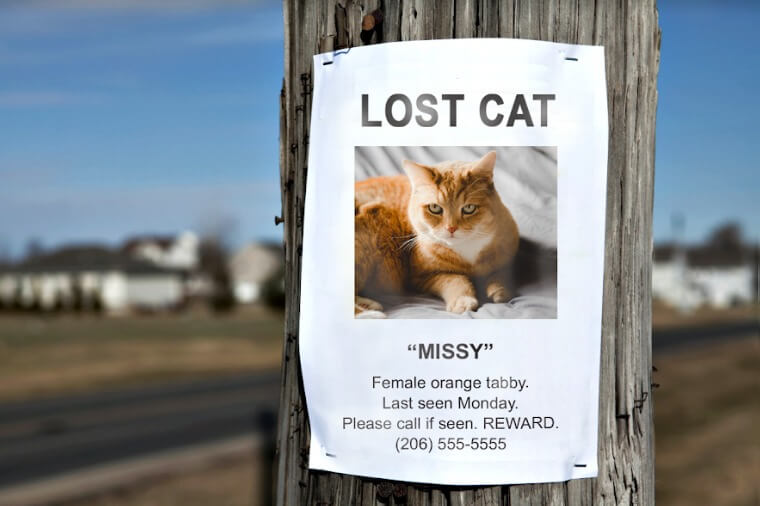 What Determines a Cat’s Homing Instinct?

As Herrick noted, although all cats retain the ability to find their way back home when lost, not all cats will use it to the same extent or with the same efficiency level. Their success is largely situational, despite this being deeply rooted in their genetic and behavioral makeup.

For instance, Herrick’s research noted that a cat would be far less likely to return home if something negative drove it away. If a natural disaster separated the family from the pet or it was spooked by animals in the neighborhood, the chances of a lost cat coming back home could be lower. However, other factors can contribute to the likelihood of a cat returning home after being lost.

Almost all cats that display some type of homing behavior have some level of experience in the outdoors.

Sixty-seven percent of cats reported to be able to find their way back home have regular access to the outside environment. Twenty-five percent of these cats are exclusively outdoor cats and a mere 7% live indoors only.

The younger a cat is, the less likely it is to exercise its homing ability very well. Most cats (58%) are between 3-10 years old when they make their way back home after getting lost.

Young adults are nearly as efficient, making up 34% of returning cats. Seniors and kittens have the hardest time coming back home at only 6% and 2%, respectively.

Interestingly, whether your cat has been fixed or not plays an influential role in whether it’ll display homing behavior or not. First, males seem to be better at returning home than females. Secondly, intact males lead in homing abilities, making up 37% of returning cats.

The context of the cat’s journey home also plays a critical role in whether it’ll reunite with its family. Most (55%) incidents occur due to the cat simply becoming lost.

However, it can get back to a new home about one-third (29%) of the time. Results are quite split on instances of the cat returning to an old residence, which occurred 45% of the time.

The area where the cat was lost will determine its success in returning home. Most (54%) homing cats trek across rural environments on their way back home.

However, your cat can still be successful in nearly all kinds of habitats, including urban (37% cats display homing behavior in these areas), suburban (53%), highways (22-45%), and rivers (38%).

It’s not quite clear how cats are able to use their homing instincts to get home after getting lost or running away. Fortunately, they often have a good chance of returning based on instincts alone.

It can be worrisome when your cat gets separated from the family. Fortunately, it’s quite easy for them to find their way back home, although scientists don’t yet understand how it’s done.

You can reduce the chances of your cat becoming lost by supervising their time outside, getting a leash to take them on exciting walks, and offering fulfilling enrichment for an indoor life with cat-approved toys.