“If I Fits, I Sits:” Cats Love Imaginary Boxes, Too - An Interview with Gabriella E. Smith, M.A.

Saving yet another Amazon box for your beloved feline? You might not have to this time! Gabriella Smith, M.A. and colleagues have expanded on past research and demonstrated that cats might not need a real box to cozy up in a small space.

In an interview with Catzio, Smith gave a bit of much-appreciated expert insight into the mind and concealment behavior of one of the world’s most cherished pets.

In 2017, Gabriella E. Smith was scrolling through Twitter when she came across the hashtag, “#CatSquare.” Cat owners worldwide were curiously entertaining themselves and their cats using tape, the floors in their home, and a bit of silly imagination.

The casual observers found that, even if they presented their feline companions with the shape of a box on their floors – not an actual physical box – the cats would nestle themselves inside the taped borders. The unofficial social media experiment was inspired by the long-lived phrase, often applied to cats, “if I fits, I sits.”

So pleased to announce that my paper, "If I Fits I Sits: A Citizen Science Investigation into Illusory Contour Susceptibility in Domestic Cats (Felis silvestris catus) has just been published in AABS! #IfIFitsISits#CatSquare#CitizenScience#CommunitySciencepic.twitter.com/AXbDttnOGC

This refers to wild and domestic cats’ tendency to conceal themselves in seemingly cramped spaces to lower their stress levels or merely make themselves comfortable, away from the prying eyes of other animals or their human housemates. Most people witness their cats exercise this behavior when they open up a cardboard box and leave it empty for the taking.

Eventually, the cat finds its way inside and claims the space as its own, whether for play or relaxation. Many have gone so far as to make entire box castles for their little fur-babies.

Yet, few people know that this adorable behavior arises from deep-set evolutionary adaptations that have been passed down for millennia in the family Felidae, the scientific name for the cat family – or that it applies to intangible objects, too. 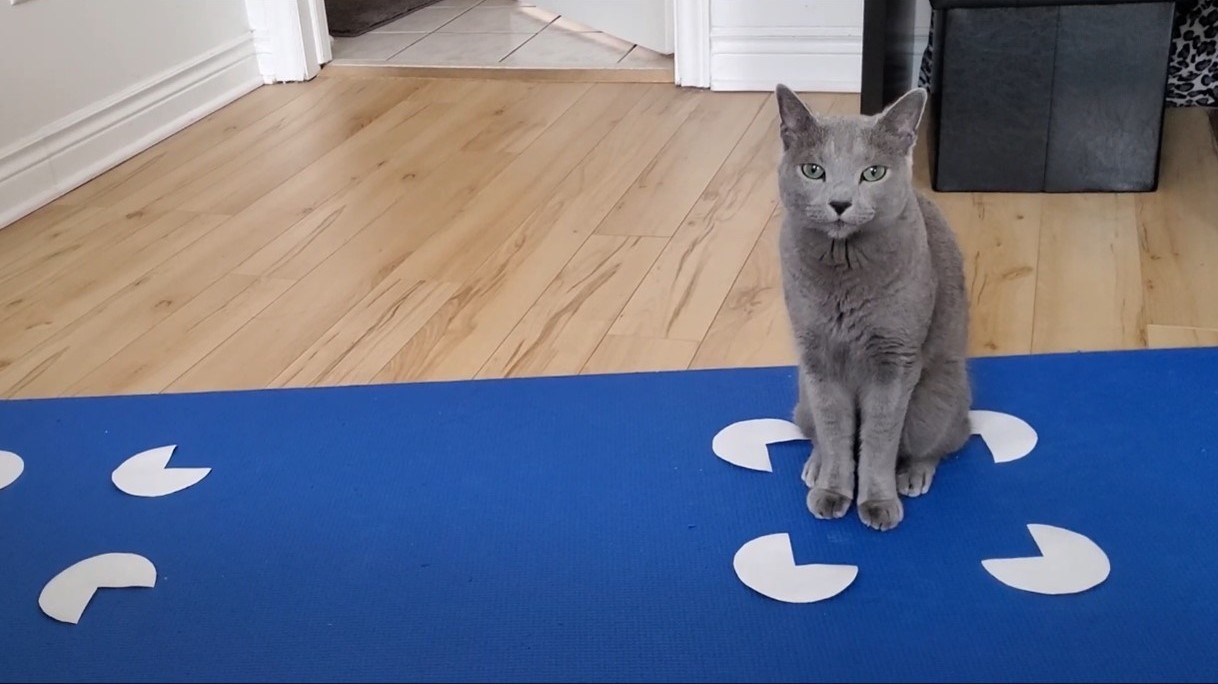 After perusing through the amusing #CatSquare tweets, Smith reached out to Dr. Sarah-Elizabeth Byosiere, a professor in Hunter College’s Animal Behavior and Conservation Program, Department of Psychology.

She felt an inkling of inspiration after seeing her roommate’s cat back at home and wondered, “Is there such a thing as an illusory square?” This idea arose from the famed Kanizsa triangle illusion, a sort of optical illusion that leads the human eye to see a triangle where only some non-connecting contours are present.

This is made up of three Pacman shapes, all arranged at three points and turned inward with the apex of the V-shaped mouths aligned to suggest a triangle shape in the center.

To make a square shape, the Pacmen are adjusted to four points, aligned to suggest a square in the middle instead. In Smith’s study, a control option was included, which featured the Pacmen facing outward in the same square arrangement.

Since the brain sees an incomplete shape, it essentially “fills in” the lines to make sense of the broken outline.

Based on current academic and everyday knowledge regarding cats’ tendency to “sit on things on the floor,” as Smith put it, she pondered the possibility of their inclination to replicate the behavior shown in the 2017 viral hashtag.

Yet, this was not the only inspiration. Smith and her colleagues’ study was based in part on a 1988 study that revealed that cats can, indeed, see subjective contours, further strengthening the foundation on which this project was built.

All these elements came together to essentially revive the Cat Square phenomenon via a citizen science approach, powered by Hunter College’s Thinking Dog Center, directed by Dr. Byosiere. They and Philippe A. Chouinard teamed up to invite homebound cat owners bored in quarantine to help out with the study (though the cat owners were unaware of the study objectives at the time).

“I Fits” in an Imaginary Box

Since people were at a loss of how to occupy themselves after such a long time in quarantine, circumstances were perfect for a study setup that catered to cats’ comforts and behavior.

“Cats behave most naturally and organically when they’re in familiar settings, and you can kind of think of it in the same way as humans when we’re going to a hospital, for example… You act a little bit differently. You’re out of your comfort zone,” Smith said, explaining the team’s citizen science approach.

With the cats nice and comfy, the researchers were sure to get the behavior they sought. Owners voluntarily completed a preliminary survey via social media and signed up for the study via the project’s website. Of the 561 initial enrollments, 30 cats finished the entire experiment, and nine made at least one selection when subjected to the Kanizsa square test.

The test required owners to use common household items to make their square outlines and Kanizsa illusions:

Each square, both real and “illusory,” was made to the same specifications: 20.32 cm x 20.32 cm (8 in x 8 in). They were designed to allow the cat to comfortably sit or stand inside with all four limbs comfortably positioned but not sprawled. In the end, the owners’ recordings showed that the cats chose the Kanisza square and square shape more often than the control.

These results demonstrated that cats are, in fact, susceptible to the illusory square, revealing a more “ecologically relevant paradigm” than the flagship 1988 study.

“What this informs us is that they likely underwent similar evolution on their vision properties and their processes. It’s likely that they perceive contours different in luminance as humans do and the Kanisza illusion kind of hijacked this ability to see contours based on luminance, and our brain guesses what is in the negative space,” Smith explained.

“Our brain is assuming that the line continues. But the cat’s eye and brain perceives that the way humans’ do as well. So, some sort of shared, visual evolution, in that sense.”

Are Wild Cats Susceptible to the Illusory Square?

This behavior may not extend to cats in the wild due to domestic cats’ exposure to human structures. Smith referred to the Müller-Lyer illusion, which showed that humans who grew up with varying infrastructure types perceive convex and concave lines differently. Based on this idea, cats that did not grow up around human infrastructure would be less susceptible to the illusion.

Yet, Smith is interested in exploring this relative susceptibility. She said, “You know, it’s likely that they are also susceptible to it because it’s such a primordial visual phenomenon to see these types of contours. However, whether or not they sit in it and have this desire to sit within contours and complete the Kanisza would be an interesting question.”

Still, the attraction to boxes, squares, and concealed spaces, in general, is a shared ancestral trait. For example, many big cats have been observed to sit in large refrigerator boxes in zoo settings.

Still, the degree to which this stress-reducing concealment behavior likely varies across environments. Yet, whether wild or domestic, this study further informs cat caretakers on how to keep their cats comfortable and happy.

Why Do Cats Sit in Boxes? (Real or Fake)

So, what’s this behavior’s purpose in the wild? It turns out, cats’ tendency to squeeze themselves into small spaces is not unique to domestic life. Even big cats find comfort in itty-bitty hideaways. According to past research, concealing themselves in this way helps cats to manage their cortisol concentrations.

Cortisol is a hormone produced by the adrenal glands and plays a prominent role in cats’ natural stress response. It’s often used as a marker for monitoring cats stress levels in reaction to situations such as:

When the cat is stressed, its cortisol concentrations go up. In some cases, they can go too high, even when the hormonal fluctuation is unwarranted. In these cases, the cat is at risk of developing Cushing’s disease (although it’s rarer in cats than in dogs), among other complications.

To mitigate these health risks, cats seek a little me-time by skulking away to their boxes and hidey-holes. In 1993, Dr. Kathy Carlstead and colleagues noted that this behavior was negatively correlated with cortisol levels, meaning it noticeably brought down their stress levels.

The scientists ultimately concluded that small, private spaces were an essential part of life for our feline companions, stating that “hiding is an important behavior for regulating [the hypothalamic-pituitary-adrenal] axis caused by an unpredictable environment.” Interestingly, an intangible box might just offer cats the same level of solace.

The phrase “if I fits, I sits,” has long been shared in the cat community as a silly, affectionate references to kitties’ tendency to squeeze themselves into cozy boxes and other small spaces that are seemingly uncomfortable for other creatures.

Smith and colleagues’ study shows that this isn’t just some funny behavior, but has deep roots in felines’ evolutionary development. Further, the inclination doesn’t only apply to physical objects, but 2D or somewhat “imagined” hiding spaces as well.

You can try your version of this citizen science experiment at home and learn more about cat behavior by tuning in to future expert chats and cat care guides with Catzio.