Why Do Cats Hiss?

Although the modern pet owner may think of cat hissing as merely a sign of frustration or other forms of stress, this vocalization is deeply rooted in cats’ evolutionary history. These days, hissing is a critical part of a cat’s communication with other animals and its human companions.

What does it mean when a cat hisses at you? If your cat hisses at you, it typically means that you’ve done something to upset it. You may have touched a sensitive part of its body, handled it too roughly, or might just be annoying the kitty. When directed at other pets, cat hissing may indicate confrontation, dominance behaviors, or defensive reactions.

Most cat owners rarely hear their cats hissing. But when they do, it’s immediately apparent that something’s wrong. Scientists don’t know much about this behavior, but existing research on this facet of aggression shows that it’s a much more complex element of cats’ lives than you’ve ever imagined.

Why Do Cats Hiss? 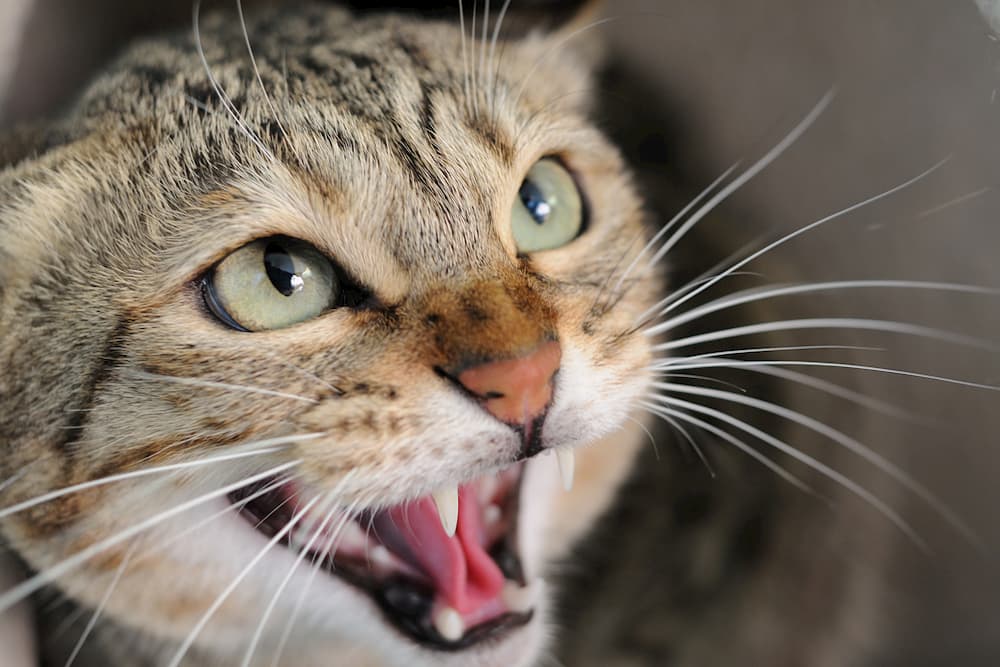 Hissing is just one of many vocalizations that cats use to communicate with their humans. Since your cat doesn’t speak your native language (as far as you know), it must figure out ways to get its feelings across effectively. This is especially important if your cat is upset or feels threatened, which hissing is primarily used for.

It serves no one for a cat to leave humans guessing about its feelings. Although it may seem mean and maybe even threatening, hissing is actually a very merciful form of communication.

See, what most people don’t understand is that animals don’t like conflict. Indeed, they do everything they can to avoid conflict. This is because any fighting or other forms of confrontation take energy, a precious resource in the natural world.

When domestic cats’ ancestors evolved, the species needed to adapt to ecological pressures to maintain suitable fitness. No, not fitness as in a physical condition, but the measure of reproductive success.

In the textbook, Evolution: Making Sense of Life by Carl Zimmer and Douglas J. Emlen, an organism’s fitness is defined as “[t]he success of an organism at surviving and reproducing, and thus contributing offspring to future generations.” The more offspring an individual has, the higher its fitness. But what does all this have to do with cats hissing?

Hissing is a reliable way to keep a cat out of a fight, helping it survive longer to make more kittens. So, in a way, vocalizations like hissing help a cat increase its fitness. Of course, this is a very indirect benefit of hissing. This behavior works alongside many other adaptive qualities that can improve an animal’s chances of successfully reproducing.

A more direct reason why cats evolved hissing for communication is the ability to save energy. Even if no one gets severely injured, fighting is an energetically costly activity. Whether two cats are fighting over territory, food, lady friends, or anything in-between, they are using up all the energy stored from the food they eat.

This means they won’t have any energy left to forage or hunt for critical sustenance, find shelter for themselves or their kittens, and so on. If their energy stores get too low, they could even be at risk for compromised immunity, leading to sickness and other potentially life-threatening issues.

These are only a few reasons why cat hissing evolved, to begin with. Instead of dueling one another, cats default to hissing and other noises. Hopefully, this dissuades their opponents from wasting their energy and lowering their fitness.

Many theories exist concerning why cats learned to hiss. One intriguing hypothesis is that cats may have developed hissing from mimicking snakes. (In other words, they were being “copycats.” Bah-dum-tss!) Mimicking is a prevalent defensive behavior across numerous species – plant and animal alike – so this idea is not far-fetched.

Why Do Cats Hiss at Humans?

Not only does hissing dissuade cats from scuffling with each other, but it's also essential to communications between people and pets. Now, this isn’t to say that hissing is acceptable behavior. It’s certainly not. Instead, it’s a sign of excessive aggression that you should nip in the bud before it becomes a safety problem.

You can also minimize instances of aggression from your kitty by being mindful of how you interact with it. For example, you understand that your cat is most likely to hiss at you when it’s feeling threatened or angry. In that case, you’ll want to avoid behaviors and circumstances that might put your cat on edge, such as rough handling or haphazard pet introductions. Other reasons why your cat might be hissing at you or someone else include:

Figuring out a cat’s triggers might not be as easy as it sounds for some cat owners. If your ordinarily easy-going cat is hissing, you might be confused since there's no outright provocation or apparent pet peeve. In these instances, cat hissing might not be indicative of direct aggression but a power play.

In addition to stopping fights before they pop off, hissing helps cats establish their place in a dominance hierarchy. (So, if you live in a multi-cat household, you’re going to be hearing hissing pretty often.) When this feisty vocalization is directed at you, it could mean that your feline friend has some dominance issues that you two need to work out together.

Cats hiss by forcing short bursts of air past their arched tongue. You can make the sound like this:

This explains the physical part of cat hissing, but how does it work on a deeper level? Well, the short answer is scientists don’t know. Researchers haven’t really investigated this question in decades, as many existing studies are from the late 70s to mid-90s.

One of the most interesting publications was published in 1978, after Malcolm F. MacDonnell and Susan Stoddard-Apter looked into the connections between cat-to-cat interactions, brain activity, and hissing.

Their study found that aggressive behavior, including cat hissing vocalizations, is directly related to a part of the brain called the “septum.” The septum pellucidum (its whole name) is a thin membrane found at the brain’s midline. It’s what separates the two halves of your brain, known as the cerebral hemispheres.

Scientists report that this is the absence of the septum is the most common type of forebrain malformation in humans. Yet, it can happen to cats, too. During early development, the brain's two halves might not separate correctly, leaving them in a “fused” state.

This can lead to behavioral abnormalities and neurological issues, which is precisely how researchers learned about the relationship between this part of the brain and hissing.

Septum abnormalities in several species are closely associated with dramatic fluctuations of aggressive behavior. Yet, it’s not clear whether these fluctuations lessen or intensify aggression due to inconsistent findings.

How Your Cat's Brain Controls Hissing

MacDonnell and Stoddard-Apter surmised that the septum could possibly impose “excitatory as well as suppressive effects on aggressive behavior.” More specifically, part of the septum influences intraspecific, or same-species, aggression.

In other words, the thin barrier dividing the brain plays a vital role in your cat’s hissing and general confrontational behavior toward other cats.

It’s related to “confrontational” interactions overall because, according to MacDonnell and Stoddard-Apter, hissing is a crucial part of three main behavior categories:

Still, they mainly focused on the “attack” division in their study. The duo observed the brain functioning of adult female cats that were reasonably well-behaved in their interactions with other cats and rodents.

They stimulated a portion of the brain called the ventromedial hypothalamus (VMH) and measured the duration of hissing vocalizations over 10 seconds, revealing a connection between the two. Every time they stimulated the VMH, each of the 22 cats hissed. When they stimulated the septum alone, only two of the cats growled quietly.

Interestingly, agitating the VMH resulted in stronger responses most of the time. For example, when the scientists observed the VMH alone, hissing lasted between 5.2-10 seconds. On the other hand, testing the VMH and septum together only yielded a hiss that lasted 1.4-8.17 seconds.

At first glance, this would suggest that when the VMH and septum work together, the cat’s aggression levels are lower. However, that’s not necessarily the case. MacDonnell and Stoddard-Apter took it one step further and studied how these brain structures influenced attack cats’ attack behaviors.

Every time they stimulated the VMH on its own, the cats kept their cool. Yet, simultaneous VMH and septal stimulation caused attacks every time! They wrote,

“As the paired stimulation was applied, the cat fixed its gaze on the other cat, growled, hissed, and abruptly launched an attack. The attack took 1 of 2 forms: sometimes the attacking cat slashed vigorously with its claws; at other times, the attacking cat leaped through the air onto the other, initiating a rough and tumble fight. As soon as contact was made, the stimulus was turned off and the attack ended.”

Shockingly, the cats displayed normal behavior after the trials were over. They went right back to casual interactions with the other animals or minded their own business entirely. No spontaneous attacks ever happened, further proving that the aggression came directly from the agitation of those two brain structures.

Hissing plays a pretty big role in cats’ lives. From the time their ancestral species developed the behavior up to now, it’s a critical part of communication that just may save a cat’s life from time to time.

Most of the time, though, hissing operates as your cat’s final warning before it goes bonkers. So, if you catch your kitty making a noise like a vicious whisper at another animal (or person), diffuse the situation as quickly as you can to avoid any scuffles.